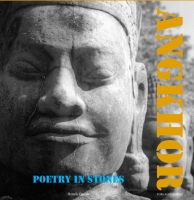 “So much weathered beauty.
So many stones. Such impressive
architectural masterpieces.”

Facts about the book:

Henrik Bøegh is well known in Scandinavia for his delicate photogravures with motifs from his many journeys to the ancient Buddhist cultural centers in Burma, Cambodia, Laos and Vietnam, and for his artistic appreciation of Islamic architecture in southern Spain, Morocco, and the Middle East. He has also photographed the Mayan masterpieces in Mexico and Guatemala, and the sacred sites of the Incas in Peru. The driving force behind his fascination with ancient centers of religious and political power is his obsession with stones and ruins.
Henrik works both in his studio in Copenhagen and in his studio in Andalusia, Spain. He is a member of “The Danish Society of Fine Arts” and “The Danish Printmakers Society.”

Angkhor temples near the town of Siem Reap in Cambodia were built in a period when the Khmer civilization was at its highest (802-1432). The Khmer-people’s origins go back to the ninth century when Cambodia seceded from the kingdom of Java. In the years 802-1432 the Cambodian kings in Angkhor reigned over an empire that stretched beyond the current boundaries of Cambodia and into Thailand, Laos, Vietnam and Burma. In the 13th century this empire was at its peak, and the royal city of Angkor with its one million inhabitants (comparable with today’s New York City) had become more than a center of political power in Southeast Asia, it was also a highly civilized society with irrigation systems, roads, canals, agriculture, and hospitals. The 100 temples in the Angkhor area comprised the sacred infrastructure of a spectacular administrative and religious centre.

Like all great civilizations Angkhor experienced both up and downturns. The Angkhor Empire suffered severe damage during conflicts with the Cham kingdom in Vietnam and the Bagan kingdom in Burma. Throughout the country there are clear traces of the many rivalries. The empire was not only threatened by external enemies; within the court there were also power struggles. These were often due to conflicts about religious questions such as whether the official state religion should be Hinduism or Buddhism.

The secular buildings, public houses, and palaces that were built in wood have, of course, long since disappeared. Only the temple houses of the gods that were built in stone and tile survived. Examples of the finest sculpture and carving work of both religions are well represented throughout the Angkhor area.

The downturn began after Jayavarman VII’s death in 1219. Countless raids from Thailand over the next 200 years forced the Angkhor kings to move their administration to Phnom Penh. With few exceptions the Angkhor temples were only visited by pilgrims and holy men during the following 100 years. Since that time Angkhor’s temples were abandoned, forgotten and overgrown by lush jungles. Not until the French archaeologist Henri Mahout’s rediscovery of these forgotten treasures in 1860 did attention turn to this world heritage site.